In the opening chapters of ‘Swansong’, the reader is faced with the eerie, crumbling edifice of the long abandoned Ashlorn Asylum. The building is the setting for an extensive overnight ghost hunt, in which a team of investigators and a British television film crew search for signs of the unexplained within Ashlorn’s decaying wards. The event is witnessed through the eyes of Amy Wheler, a level headed Urban Explorer, whose sole purpose of visiting the Asylum is to take photographs – the last account of a building condemned to demolition.

While the event in itself is full of horror, I wanted to bring a new twist to the idea of what is essentially a straightforward account of a ghost hunting vigil (and Urban Exploration) in a decrepit building. I wanted to give Ashlorn a personality (and an arc) all of its own – and make the connection between the characters and the setting take on a whole new dimension, in which the building itself becomes a character in its own right.

In order to ‘personify’ a building, I needed to give it an appearance, a history, and various features that make it stand out – that generates fear and unease in both the visiting characters and the reader – that give the impression that the building can communicate and express itself in a way that goes beyond atmosphere and surroundings; in a way that is truly terrifying. I wanted to make it dark, suffocating and skin-prickling, give it a history as shocking and controversial as any true case study, but also fill it with a sense of tragedy that will allow for other emotions beyond fear to manifest within both characters and readers alike.

This series of posts will follow the construction of this infamous fictional Asylum.

In this first post, I want to give a few short paragraphs reflecting on the origins of Ashlorn; and featuring five places that I gained direct inspiration from whilst concocting the form, layout and chronology of my fictional institution.

(DISCLAIMER: all pictures were collected through Google searches, and are accredited to their original websites) 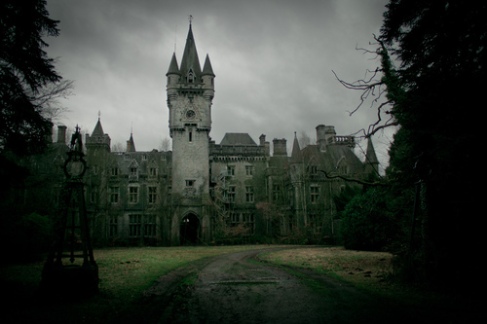 The first source of inspiration for Ashlorn is not an Asylum at all, but a 19th Century Gothic Revival Castle in Belgium – Chateau de Miranda. Also known as the Home de Noisy, Chateau de Miranda was built in 1866 by an English architect named Milner for the Liedekerke – Beaufort family, who had abandoned their feudal castle of Veves during the French Revolution. The family used it until the Second World War, when it was briefly used by the Nazis. In 1958 it was used by the Belgian National Rail Company (the SNBC) as a home for rail workers’ children. It was later converted into a children’s school.

It has a look of fantasy about it, but of a castle from the darkest fairytale. Gutted by fire in 1991, Chateau de Miranda has since stood empty. It is a popular attraction for Urban Explorers, however care is advised as the highest (fourth) floor has almost completely collapsed.

Chateau de Miranda has served partly as the inspiration for the exterior of Ashlorn Asylum’s oldest surviving block, formerly known as ‘Hayter’s Madhouse’ and the part of the building which also features in the 19th Century accounts in Swansong. However, there are two images from the inside of the main hallway and staircase which I have also been inspired to include as Ashlorn’s administration foyer and grand staircase: 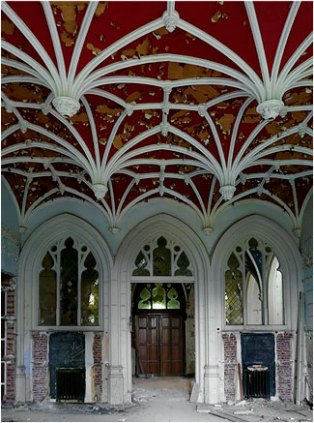 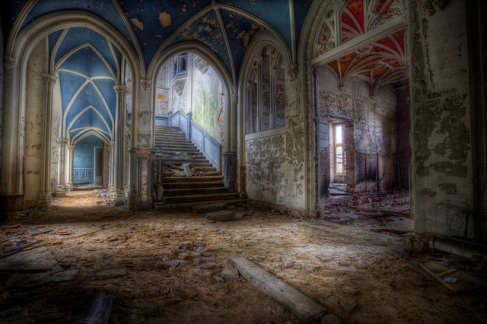 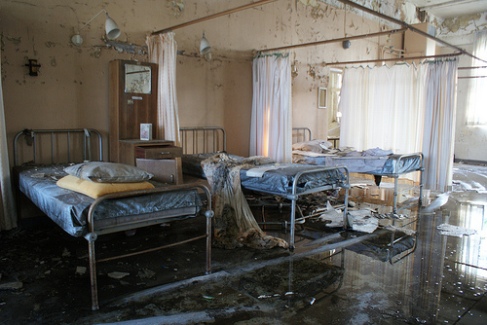 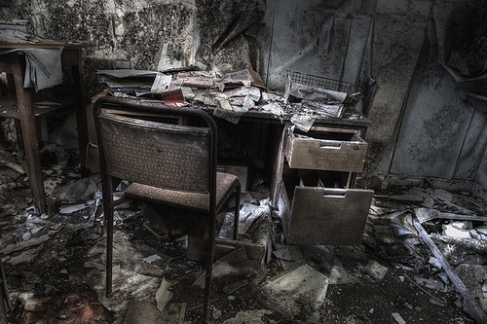 Built to ease overcrowding in neighbouring Surrey Asylums, Cane Hill Hospital was founded in the borough of Croydon in 1880 and opened its doors to patients in 1882, being further extended in 1888. Cane Hill possessed eight different designs of ward, enabling the institution to cater for a broad spectrum of sufferers – sick, acute, epileptic and chronic. At its peak in the 1950s, it held over 2000 patients in over 40 wards.

Cane Hill finally closed its doors in March 1991. Since then, it has been one of the most popular sites for Urban Exploration, and a fascination surrounding it and its ‘perfect’ state of abandonment created what has been referred to as ‘the Cult of Cane Hill’. Its popularity has been partly down to its likeness to a ‘time capsule’. Up to 2008, most of its fixtures and fittings remained eerily preserved, while it is evident in the photographs and video recordings made by Urban Explorers that its population simply ‘locked up and left’. Patients’ possessions and medical files lie abandoned beside original hospital equipment giving a sinister impression of a place that seemed to have been abandoned in a hurry; a ghostly echo of an asylum’s final hours. It is this atmosphere I wish to portray with the Urban Exploration/Paranormal Investigation of Ashlorn.

Much of Cane Hill was demolished in 2008, while a fire gutted what was left of the ‘holy grail’ of Urban Exploration on November 13, 2010. 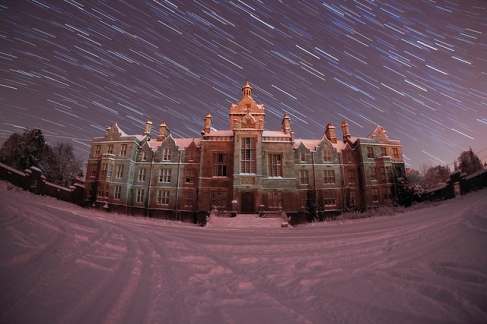 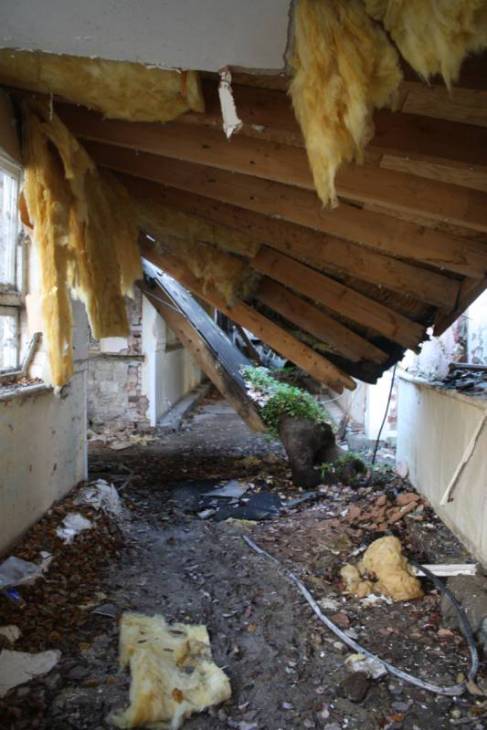 Built in 1844 and first opened in 1848, Denbigh Asylum (also known as the North Wales Hospital) was built to provide Welsh speaking people with an Asylum for their lunatics. It was closed down in 1995.

Denbigh provides much of the inspiration behind descriptions of the damage done to Ashlorn. I first became aware of Denbigh after finding an Urban Exploration video documenting it on Youtube, during a routine hunt for information on abandoned asylums. While not having the same ‘time capsule’ effect as Cane Hill, Denbigh really gives a feel for what over a decade’s worth of damage by vandals, arsonists and the elements has done to a once enormous, thriving Institution. The smashed windows, collapsed ceilings, peeling paintwork and wallpaper, exposed threads of yellow fibreglass and other scattered debris bring about a truly sinister atmosphere, coupled with a real sense of danger. 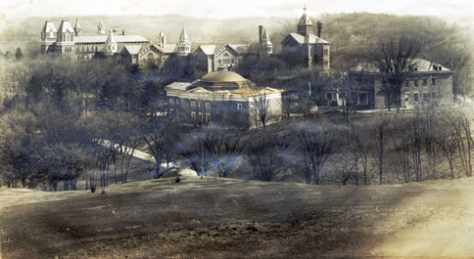 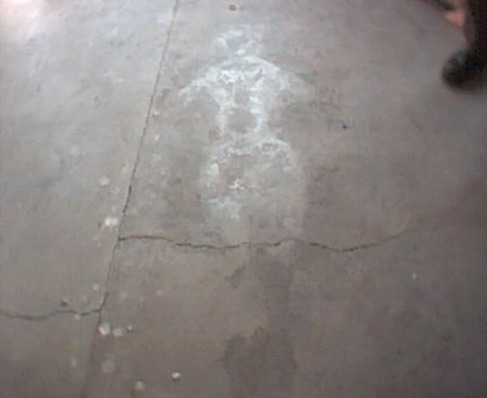 I first came across ‘The Ridges’ (also known as the Athens Lunatic Asylum) on a list entitled ‘The 10 Most Terrifying Places on Earth.’ The former Asylum (which was listed as seventh,) is now part of the campus of Ohio University and is well known for being a hotbed of paranormal activity. It is also infamous for the strange death of one of its female patients.

1,930 people are buried at the three cemeteries located at the Ridges. Of those, 700 women and 959 men lay under the headstones marked only with a number. This fact gave rise to my idea to refer to my patient in Swansong, Selina Prior, as ‘342-S’.

After being acquired by Ohio University, many of the Asylum’s buildings were renovated and converted. However, several wings and some entire floor levels have been left abandoned. It is in one of these untouched floors that The Ridges’ most famous ghost resides. On December 1 1978, a patient with profound mental difficulties named Margaret Schilling, mysteriously disappeared. It wasn’t until over a month later, on 12 January 1979 that staff found her, dead on the floor of a long – disused and unheated ward. She had managed to get herself trapped in this ward – which had originally been used for infectious patients – where she had taken off all of her clothes, folded them neatly, before subsequently dying from exposure and heart failure. When her body was removed, a permanent stain in the outline of a woman’s body was found imprinted onto the concrete floor. Despite numerous attempts, the stain has never been removed. Furthermore, people walking past the Asylum at night have reported seeing the ghostly outline of a woman staring down at them from the window where the body was found.

While this Asylum is located in America, it (along with the decrepit Byberry Asylum in Philadelphia) first inspired me to locate a major part of ‘Swansong’ in a haunted, abandoned Asylum. 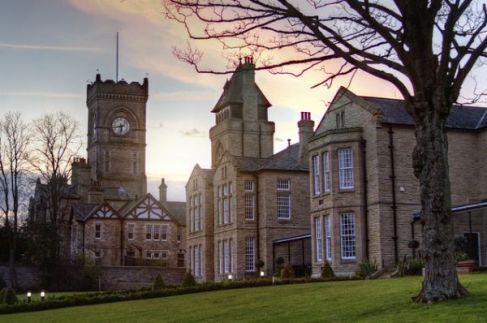 In making a controversial history for Ashlorn, I watched a television documentary entitled Mental: A History of the Madhouse, which documented several eyewitness accounts of patients treated at High Royds Asylum in West Riding. While I draw inspiration from eyewitness stories from elsewhere, this documentary and the High Royds cases that I read further into marked the beginning of a thread of research into the testimonies of Asylum patients; giving clues as to what went on behind the closed doors of the Asylum system. The two primary High Royds cases that I discovered were the treatment of Jean Davison (now recorded in her book ‘The Dark Threads’,) and the treatment of Derek Hutchinson, who shared his story with The Guardian newspaper. Davison recalls seeking help for depression, but after five years as a patient of High Royds, she was misdiagnosed with Schizophrenia and became dependent on drugs. Hutchinson, also suffering with depression, was treated at High Royds with ECT (Electro-Convulsive Therapy) and Largactil. His Psychiatrist, Dr. Todd, recommended that something was to be done about his aggression. When Hutchinson objected, the psychiatrist said ‘How would you like to be responsible for the death of one of your children?’ He was advised to undergo an operation, which was performed while he was fully awake and lasted for over eight hours. The operation made him more violent, and permanently damaged his memory and sleep patterns. My patient and staff accounts at Ashlorn are fictitious, however there is a desire to share through these fictional accounts a large degree of awareness towards the true accounts from which they originated.

Mental: A History of the Madhouse (BBC Four Documentary)